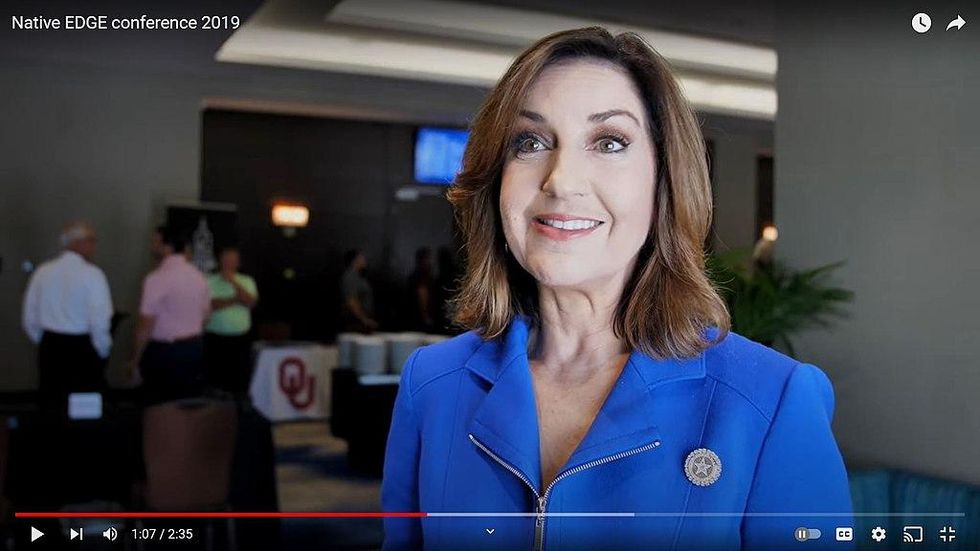 Oklahoma’s The Frontier scooped that tomorrow the state’s five largest tribes will endorse Democrat Joy Hofmeister, the state superintendent, over sitting Republican Governor Kevin Stitt. Tribe members make up seven percent of the state’s population, so this is a big fuckin’ deal in a race that’s a whole lot closer than anyone thought it would be six months ago.

In contrast to many of the western states, the tribes in Oklahoma are not reliably Democratic-leaning. In fact, The Oklahoman reports that the largest tribal donation this cycle was $500,000 from the Chickasaw Nation to a PAC supporting Republican state legislators. But Stitt, who is a member of the Cherokee Nation, has clashed repeatedly with the state’s tribal nations, over everything from casino revenues to the Supreme Court’s decision in McGirt v. Oklahoma.

He’s also been an absolutely raging asshole about public schools. The state ranks 49th nationally in education, according to a 2021 EdWeek report — a steep drop from its 17th place ranking in 2011. Stitt, who ran on raising teacher pay, nonetheless called a recent proposal to raise salaries by $5,000 an “easy cop-out.” His great plan to improve public school education is vouchers, vouchers, and more vouchers for private schools. He’s also hot to strip five percent of state education funds from any school that allows a trans kid to use the appropriate restroom, because he’s a piece of shit.

Stitt seems to need some remedial math instruction himself, according to public interest journalists at Oklahoma Watch:

He claimed Oklahoma schools spend an average of $11,500 per student without citing a source. The latest U.S. Census Bureau report shows the state at $9,508, making it the lowest in the southern region. Stitt used the $11,500 figure to describe the financial impact on an average public school and claimed that because the schools that lose students would keep their local property tax revenue, their per pupil revenue would actually increase.

Meanwhile, schools in rural Oklahoma are resorting to four-day weeks to save money and keep the doors open at all. In contrast, Hofmeister describes vouchers as a “rural school killer.”

And as a cherry on top of the shit sundae of Stitt’s education policy, the state had to give back $2.9 million in federal COVID relief funds after the US Department of Education’s inspector general found that, of $39.9 million disbursed, only $8 million was appropriately spent. Thanks to Ryan Walters, Stitt’s secretary of education, Oklahoma granted a no-bid contract to a little-known Florida company called ClassWallet to distribute $8 million of funds with essentially no supervision. Unsurprisingly this resulted in some non-approved purchases, such as $228,517 worth of television sets and TV equipment, $25,542 on washers and dryers, and $978 on Christmas trees. Plus another $10 million in private school vouchers, natch.

Walters, who is running to replace Hofmeister as superintendent, is underwater in the latest Sooner poll, with almost 20 percent of Republicans saying they’ll be voting for his Democratic opponent Jena Nelson. And weirdly enough, so is Stitt!

In a state where Donald Trump took 65 percent of the vote in 2020, Stitt’s own internals have him up by only 15 points — that is very bad, not good. In a poll conducted last week, Sooner had Hofmeister up by four, while the company had her down by one a month ago. With the caveat that small rural states are basically impossible to poll, let’s just say that it’s not out of the realm of possibility that there could be a Democratic governor in Oklahoma in 2023. In fact, this race will probably be closer than the gubernatorial contests in Texas, Florida, or even Georgia.

And so it’s a big deal that the tribes are coming out for Hofmeister with just four weeks to go before election day. They certainly wouldn’t expend the political capital if they thought there was no shot at all. It’s a weird, weird world, so maybe drop a few bucks in Hofmeister’s campaign, since a little goes a long way in a small state.

Click the widget to keep your Wonkette ad-free and feisty. And if you’re ordering from Amazon, use this link, because reasons.